Skip to content
December 6, 2022
Education
For once Rakesh Roshan is enjoying taking the backseat. For someone who always ‘called the shots’, he’s happy to let son Hrithik Roshan take over the family reins. He feels comforted by Hrithik’s caring presence. It restores him, it replenishes him. What’s more he cherishes the relationship they share. It has no filter, only frankness. No hesitation, only honesty. Hrithik is his sounding board and his sage. His son and his sunshine.

As professionals, they belong to the elite club. The filmmaker’s expertise and the actor’s enthusiasm make it a win-win situation… film after film. While Hrithik as an artiste may have been honoured with awards galore, the finest acknowledgement as a person comes from Sr Roshan when he says, “Hrithik is a much much better father than me!” Ahead of Hrithik Roshan’s birthday, dad Rakesh Roshan shares rare glimpses about his superstar son… Excerpts:

Did you notice the makings of a star in Hrithik while he was a child?
It’s difficult to gauge what a child can become. But one thing was certain. Even as a six- year-old, Hrithik used to dance beautifully. Whatever else he engaged in, be it cycling or any other activity, he’d give it his 100 per cent. That quality has been present since childhood. He was a bright student and managed to do well without tuition. But he was a shy kid. He was around 10-11 when my father-in-law (the late J Om Prakash) cast him in ‘Bhagwaan Dada’ (1986). I told him, ‘Why are you taking him? He won’t speak a line in front of the camera.’ But to my pleasant surprise, he was a different boy when the camera rolled. The moment J Om Prakashji would say, ‘Start sound action!’ Hrithik would become the character. He was amazing. I realised he had the talent. Yet, how successful he would be was something I couldn’t have predicted.

Did you expect his debut, ‘Kaho Naa… Pyaar Hai’, would make him a star overnight?
When I was making ‘Kaho Naa… Pyaar Hai’ (2000), I never imagined it would be such a big hit. But I was certain that picture chale na chale Hrithik ko kaam zaroor milega because he had done a fine job. In all humility, I credit it to the fine acumen God gave me not to portray him as a hero. Rather, I portrayed him as an actor. I didn’t introduce him jumping from the 10th floor or riding a horse. His first shot was of him waking up in the morning, his hair dishevelled, throwing aside his blanket. The character instantly appealed to the audiences. People could relate to that and identify with him. Even in the second part, there was no heroism. He quietly comes in on a motorbike on the bridge. The introduction was simple. He played both the characters with honesty. That endeared him to viewers.

Just after the release, you were shot at by assailants in an extortion racket. How did it affect a young boy on the threshold of stardom, having to brave such an untoward incident?
I have no idea what Hrithik felt at that time. He was constantly at my bedside. I was in the hospital for four to five days. But the biggest booster was the success of the film, which inspired me. It gave birth to a desire to live again for the sake of my son. Getting good news about the film, hearing favourable reviews about Hrithik… all that was heartening. 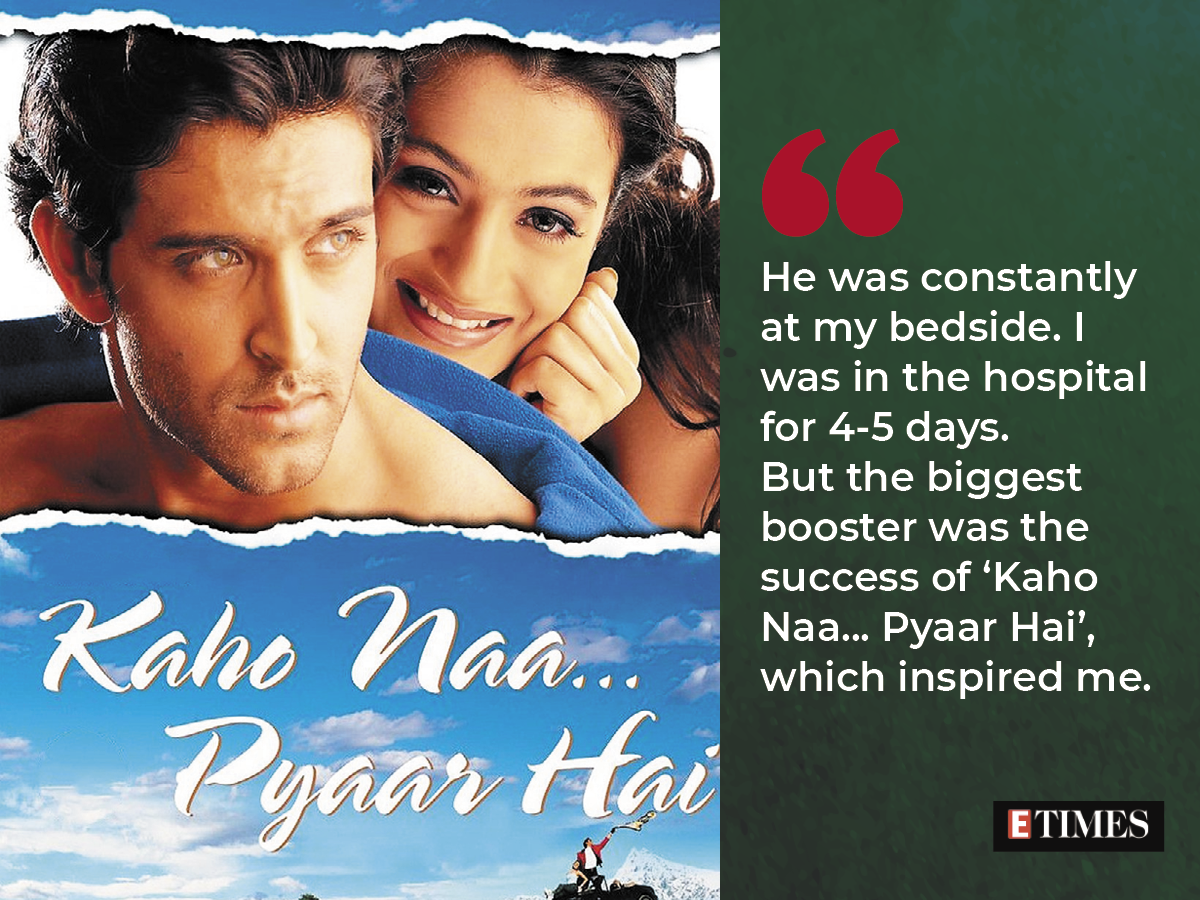 It must have been inspiring for Hrithik when his father walked up to the police station to lodge a complaint instead of rushing to the hospital…
Yes, it must have been as it could have been for others too. These are incidents that we see in films. But in reality, if people do such things, somewhere it does leave an impression. Having said that, I didn’t do it on purpose or to show off. It was a spontaneous gesture. I wanted to inform the police so that they could quickly nab the culprits.

After the superstardom, came a spate of films that put Hrithik’s career under a cloud. How do you view that?
What happened was that I had shown the rushes of ‘KNPH’ to many filmmakers and friends in the editing room. Watching the songs, the dance and the scenes, they signed Hrithik for their films before the release of ‘KNPH’. In many films, he was not the main character. But in keeping with his popularity after ‘KNPH’, they increased his role and, in the bargain, went wrong with the script. Ignoring creative concerns, they gave more screen time to Hrithik resulting in those films not doing well.

‘Koi… Mil Gaya’ (2003) turned the tide in his favour again…
Luckily, I began making ‘Koi… Mil Gaya’. The premise was exciting with kids, a unique character Jadoo and a mentally challenged boy, played by Hrithik. We were so involved in the film and enjoyed making it so much that we didn’t brood over the flops. Also, we were confident that ‘Koi… Mil Gaya’ would do well and prove good for Hrithik. And it did. From playing a simple boy and his stylish lookalike in ‘KNPH’ to a challenged character in ‘Koi… Mil Gaya’, Hrithik’s range as an actor came through.

You two form a ‘lucky’ team as proved even with the hit ‘Krrish’ series. Agree?
It’s not like that. It’s rather because we both give every film our 100 percent. Yes, we gel being father-son and director-actor. Some directors are not able to explain what they require from the actor. I being an actor tell him, ‘Don’t copy me but this is what I want’. Hrithik understands me perfectly. When I was an actor, often directors would say, ‘Cut cut cut! You didn’t get it.’ I’d ask what was lacking but they wouldn’t be able to elaborate. But some directors, who were also actors, could explain with ease. Being an actor, it works to my advantage while directing.

Also being father and son, Hrithik can unhesitatingly express his reservations. That liberty he can’t take with other directors. They can turn around and say, ‘That’s not your job.’ But we share a fine tuning. We discuss things, be it the dialogue or script. Touchwood our combination is good.

Both being perfectionist, do you clash at times?
No, no no! Whenever he comes up with a suggestion, I listen and absorb it. I never reject it outright. After giving it a thought, if it seems right, I incorporate the change. But if I believe his idea could harm the previous scene, then I voice my concern. That understanding has always remained between us. Never have we argued or fought on the set. Never!

As people, how different are you?
Hrithik’s a home loving person. He enjoys being with family. He doesn’t attend many parties nor does he throw them. Basically, he’s a bit of an introvert, a loner. He doesn’t have too many friends. He has a few childhood friends though. I am the opposite. I have many friends. Like Rishi Kapoor was a close friend and so is Jeetendra. I have other actor friends too. I worked hard and partied harder. 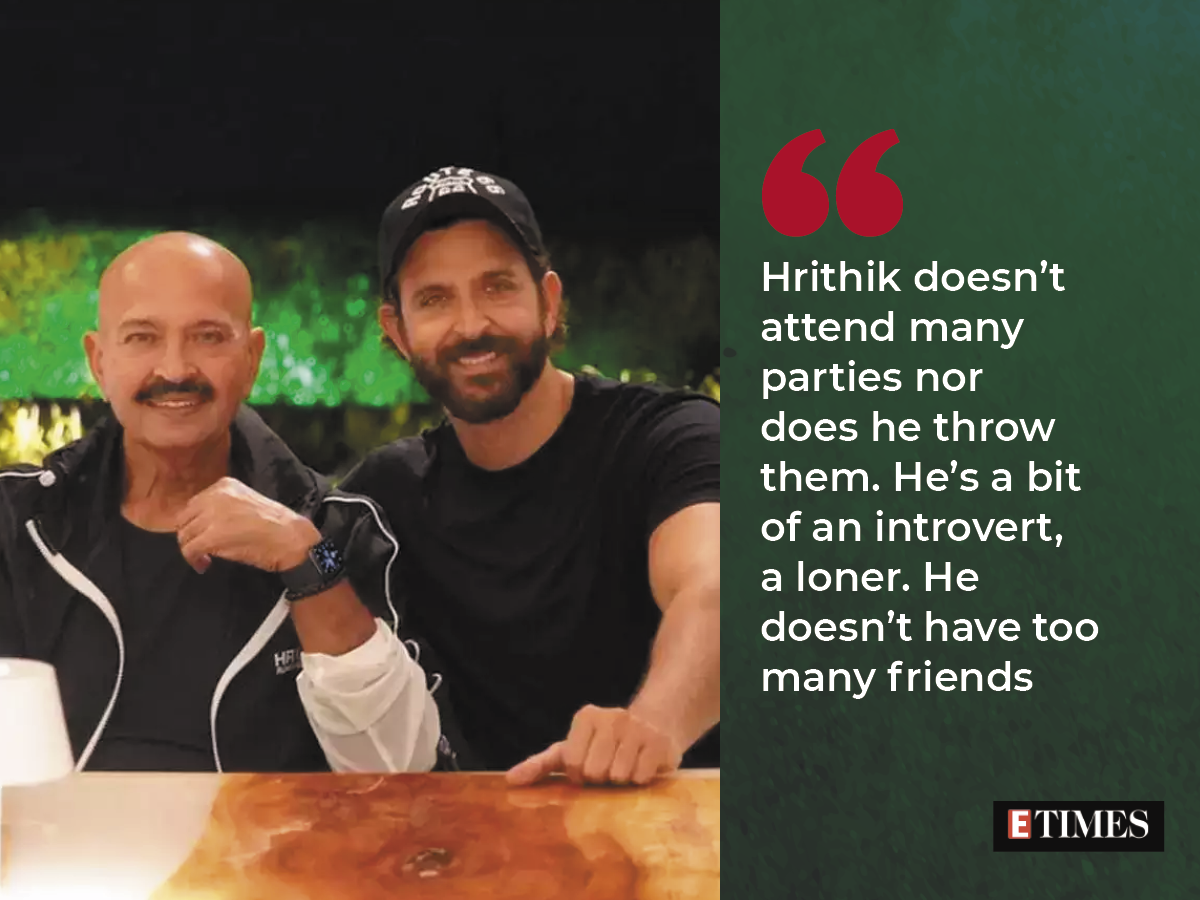 Some lesser-known facts about him…
He reads a lot. Also, he has knowledge about medicine having battled ailments. When any of us is unwell, we first rush to Duggu before visiting a doctor. He does a lot of charity, which he never speaks of. He goes out of his way to help people. He’s been looking after five-six families, where the children are mentally challenged since the past 20 years. As a family, we believe charity is not to be disclosed or discussed. Hrithik’s spiritual but not a person to visit temples to ask God for favours. That’s not Hrithik. He believes his deeds are far more important. 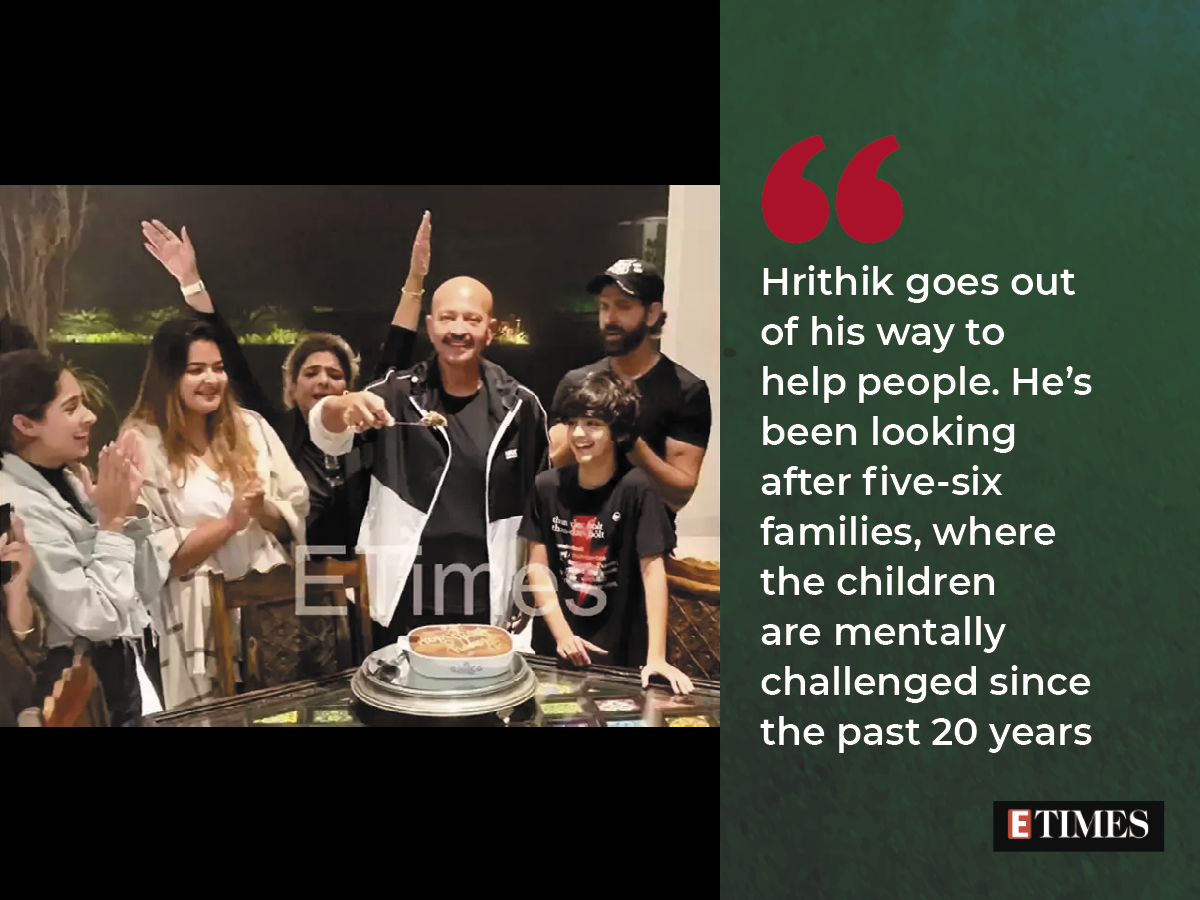 Hrithik’s relationship with Sussanne has an air of dignity, setting a benchmark of sorts for estranged couples. Comment.
Yes indeed. Right after their divorce in court, Hrithik stepped out and opened the door of the car for Sussanne. That shows his character. Nobody can teach you these things. It comes from within. He regards women and everyone else with respect. Like he touches my feet. And so do my grandchildren Hridaan and Hrehaan. You do these things instinctively. 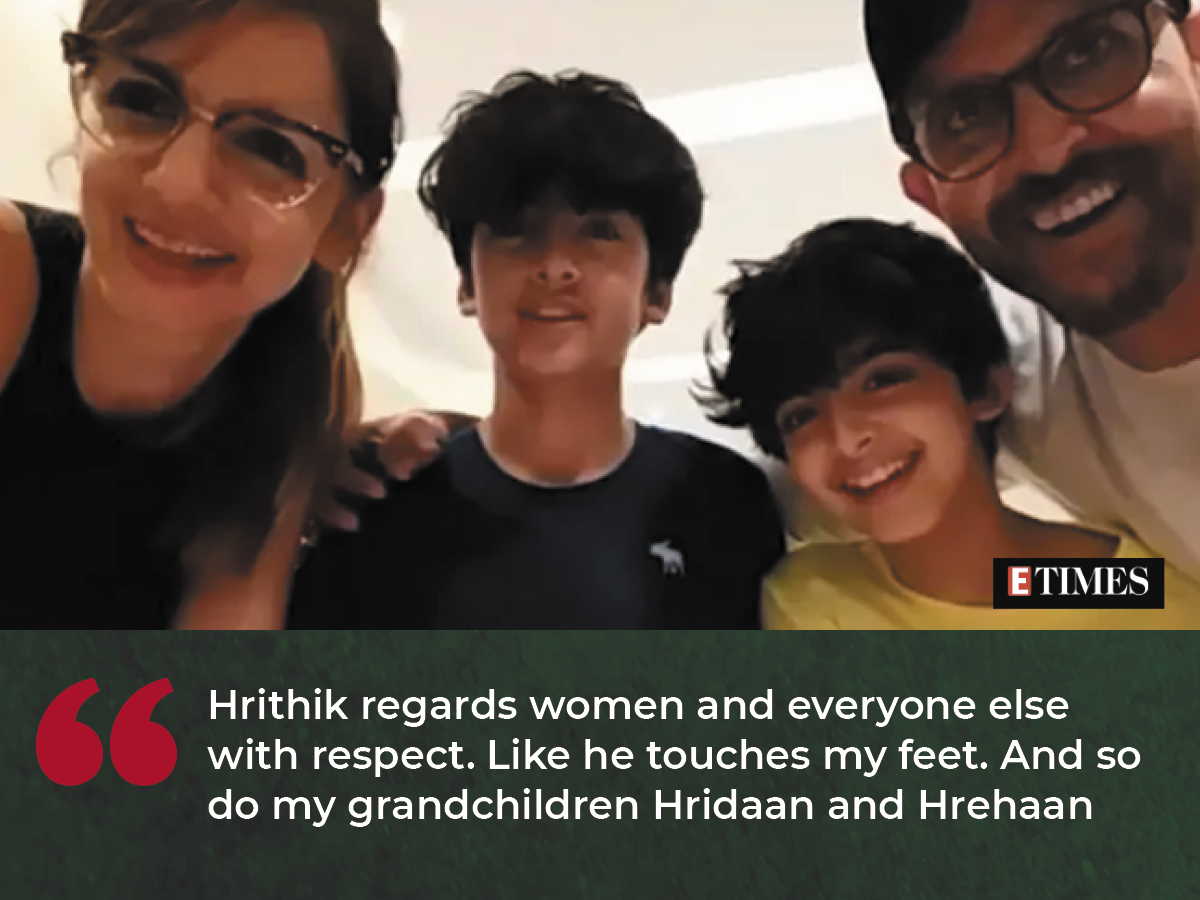 How is he as a father?
Hrithik devotes all his free time to his children. They are more like friends. He likes to go out only with his children. His holidays are reserved for them. He plans trips to the jungles, deserts… He’s introduced them to water sports and gymnastics. The boys play the piano and the guitar wonderfully. They sing well too. Hrithik’s constantly teaching them something new. He encourages them to learn everything, which can enhance their personalities and which they might require in the future. The love and attention that he showers on his boys makes me wish I could have given so much time to my children too. He’s a much much better father than me. 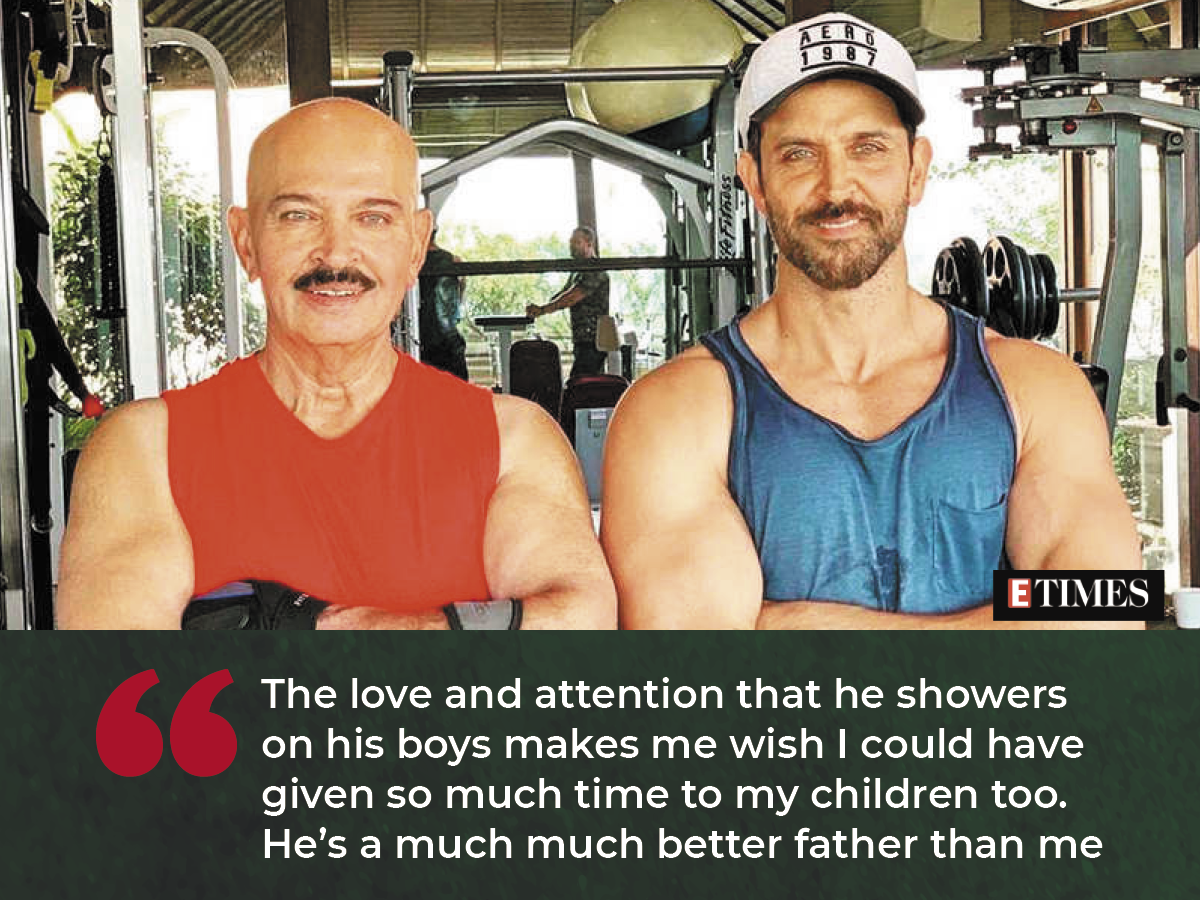 Has he grown more protective of you given the advancing years?
He’s the main Roshan in the family. Rakesh Roshan has taken a backseat. Hrithik’s in the front seat now. He looks after everyone’s needs, he guides us all the time. Basically, he’s a loving boy and loved by the family. He even goes out of his way to meet my friends. He never says he has no time.

What’s the hallmark of your relationship with him?
The best thing about our relationship is that we can be honest and candid with each other. That brings you extremely close. I don’t think twice before speaking my mind with him. You don’t feel so free even with friends. With friends, you fear whether your frankness will upset the other person. You wonder how to put it across. But Hrithik’s more than a friend.

Hrithik doesn’t do many films. Is it a conscious choice?
As an actor he likes challenges. The opportunity to play inspiring characters doesn’t come by easily. That’s why he doesn’t do many films. He doesn’t want to play routine characters. There are many films that do extremely well at the box-office. When I imagine Hrithik in them, I realise that had he been in it, the film wouldn’t have done as well. Reason being, from Hrithik people expect something else. They know he’s an intense actor, so the subject and performance will be different. He works in films where he wants to justify the character. He can’t breeze in and out of a film. His characters need to have a graph. To get that kind of character and subject is not frequent. 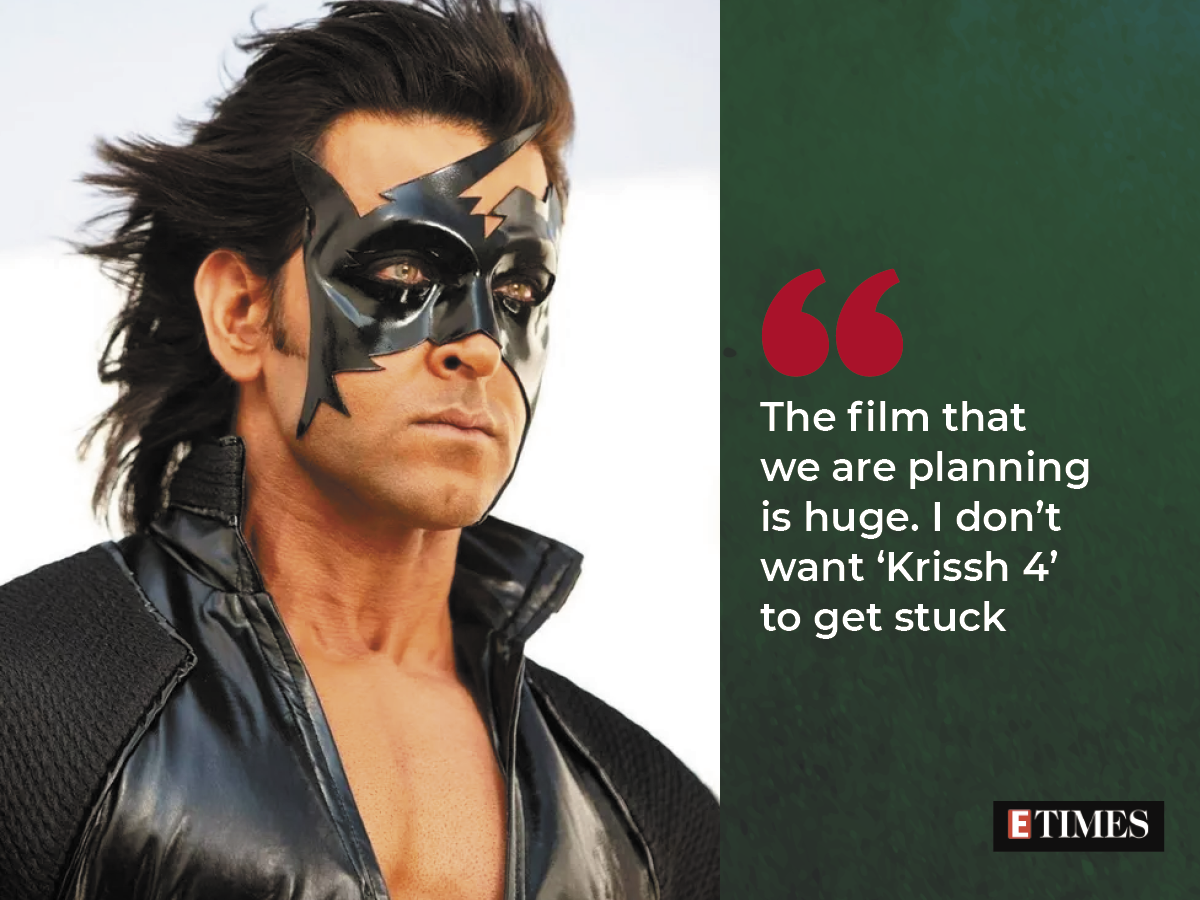 When will ‘Krrish 4’ roll?
I am waiting for the pandemic to get over. It should settle down this year. The film that we are planning is huge. I don’t want it to get stuck. As it is, the business of films has been badly affected. So, I don’t want to jump into it. I usually spend the weekends in Lonavala. The weather is beautiful there. There’s no pollution and it’s peaceful.

Around his birthday, do you wish that Hrithik should settle down and begin life anew?
Whatever is written in his destiny will happen. My wish doesn’t make any difference. Jo hoga woh hoga… aur achcha hi hoga. I just want to say Hrithik should remain what he is.